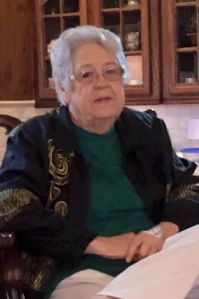 Sabine Parish Sheriff Aaron Mitchell announces the loss of longtime Sabine Parish Sheriff’s Office Dispatcher Mrs. Joan Lynn Tucker Merten who passed away on Friday July 17, 2020, at Willis Knighton Pierremont in Shreveport.
Mrs. Joan started working for Sabine Parish in May of 1993 as a dispatcher. She continued working until her retirement in January of 2014. She worked in dispatch and was in a supervisor position toward the end of her career.
She was preceded in death by her husband Gary Merten and son Michael Merten. Gary and Joan were members of the Aimwell VFD for many years.
She is survived by her daughters Kim Escott of Many and Kathy Merten of Bossier City.
A graveside service will be held on Wednesday, July 22, 2020, at Aimwell Cemetery.
The Sabine Parish Sheriff’s Office sends out prayers for her family.