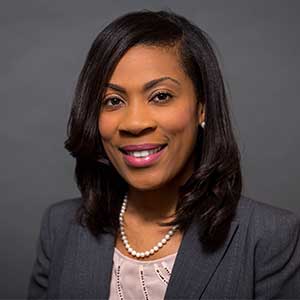 LaToya Jones Burrell (JD, MBA) accepted an offer in June to serve as dean of Graduate Education and Accreditation at North Central University, a Christian university in Minneapolis, Minnesota.

“Since February, she has given excellent interim leadership to the College of Graduate and Professional Education, while continuing to serve in her role as dean of Academic Assessment and Accreditation and associate professor of business,” said Greg Leeper, vice president for Academic Affairs. “Over these past months, it became clear that Professor Burrell was the individual to lead our graduate studies area into the future as we expand and deepen our academic offerings.”

In the new restructured role, Burrell will give leadership in the College of Graduate and Professional Education and the area of university accreditation. She will also retain her appointment as associate professor in the College of Business and Technology, teaching a reduced load and advising students. Burrell joined our faculty at North Central University in 2015.

She earned a bachelor’s degree in business administration with honors at Northwestern State in 2005. She went on to earn her law degree from Southern University Law Center, graduating in the top of her class. During law school, she was involved in several organizations, including the Moot Court Board, the Journal of Race, Gender & Poverty and the American Trial Lawyers Association’s Mock trial team. She has practiced law for several years and is licensed to practice law in both Louisiana and Minnesota. Her practice areas have included bankruptcy, personal injury, workers compensation, mass torts, and complex litigation.

Burrell also earned a master’s degree in business administration at Metropolitan State University in St. Paul, Minnesota, where she earned a perfect 4.0 and received the Outstanding Graduate Student Award.

At Northwestern State, she was a Freshman Connector, serving as Lead Connector in 2004, and was for 3-1/2 years an NSU Ambassador, a student recruiter employed by the Admissions Office. She attended NSU as a Presidential Honors Scholarship recipient and was on the 2004 and 2005 Homecoming Honor Court. She was a member of Alpha Kappa Alpha Sorority, Purple Jackets, Beta Gamma Sigma Honor Society, Phi Kappa Phi, Order of Omega and Blue Key International. She identified Marcus Jones and Reatha Cox as special mentors during her undergraduate days.

“I value my NSU experience,” Burrell said. “My experiences at NSU are paramount to who I am today.”

Burrell and her husband Gregory have two sons, Grayson and Garrison. She lives in Minneapolis and loves spending time with her family.