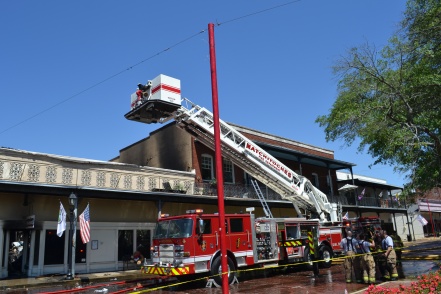 State Fire Marshal deputies continue to investigate the cause of a fire that heavily damaged two buildings on the north end of Front Street in downtown Natchitoches late last month however, an electrical malfunction is suspected to be a primary contributing factor.
About 5:30 p.m. on Thursday, April 30, the Natchitoches Fire Department responded to a commercial structure fire in the 500 block of Front Street. Firefighters arrived to find smoke and flames coming from a multi-unit building.
Mayeaux’s restaurant and All Tangled Up sustained heavy damage, and the two businesses on either side—Hello Dolly’s and Bathhouse Soapery– sustained smoke and water damage.
Additionally, the townhomes located above Hello Dolly’s and Dickens & Company sustained smoke damage and the residents inside were evacuated. No injuries were reported.
After assessing the scene, which included video evidence, state fire marshal investigators determined the fire originated at Mayeaux’s Steakhouse restaurant.
The state fire marshal personnel commended the Natchitoches Fire Department on its excellent fire suppression efforts and for its partnership in the investigation. The Natchitoches Fire Chief is John Wynn.