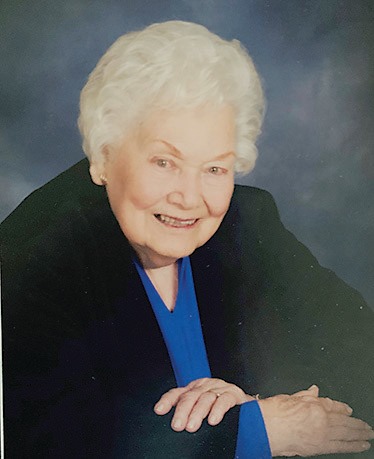 Dorothy Louise Townsend, nee Trichel, 89, died April 24, 2020, at home in the Elkins Lake community of Huntsville, Texas, where she has lived for over 35 years.
Dorothy was born July 26, 1930, in Campti to Coralie Lestage Trichel and Louis Thoss Trichel. She graduated from Campti High School in 1947. In her senior year she was the Louisiana State President of Future Homemakers of America.
In her first year as a student at Louisiana State University she was selected by Mortar Board as the Outstanding Freshman Girl. Other honors at LSU included membership in Mortar Board and serving as President of Alpha Xi Delta sorority. Immediately following her graduation from LSU in June 1951, she married David Townsend, a member of the LSU economics faculty. After he received the Ph.D. degree in 1953, she accompanied him to teaching and academic administration assignments at the University of Houston, Stephen F. Austin State University in Nacogdoches, Texas, the University of Texas in Austin, Northwestern State University in Natchitoches and finally to Sam Houston State University in Huntsville.
While living in Natchitoches, she served many years on the Board of the Association for the Preservation of Historic Natchitoches. In addition, she served on the Board and as President of the Service League of Natchitoches. Dorothy was a founding member of the Board and long-time supporter of the Natchitoches-Northwestern Symphony Society. Dorothy played for many years on the Natchitoches Country Club’s golf team.
At Elkins Lake Country Club in Huntsville, she competed on the interclub tennis team, and served on the Board of the Women’s Golf Association. In the latter, she served as tournament chairman and as President. In each of her homes in Natchitoches and in Huntsville—she enjoyed participation in many bridge clubs.
Dorothy was preceded in death by her parents; her son, David Bruce; and her husband of 65 years.
She is survived by her sister, Peggy Voorhees and husband Bob of Houston; her daughters and sons-in-law, Teresa and Peter Wright of Memphis, Tenn., and Mary and Michael Ross of The Woodlands, Texas; her son, James of Bend, Ore.; and four grandsons, Brian, Benjamin and Christopher Ross and Oliver Townsend, all of whom knew her affectionately as “Mimi”.
She will be buried next to her husband in the cemetery adjoining the antebellum (1850) Nativity Catholic Church in Campti. She was christened in this church, attended elementary grades in the Catholic School near the Church, and Dorothy and David were married there in 1951.
The family would like to extend their sincere thanks and appreciation to Dorothy’s caregivers, friends and neighbors.
Due to the current pandemic concerns, no service is scheduled at this time. Memorials may be sent to St. Thomas the Apostle Catholic Church, 1323 16th Street, Huntsville, TX 77340, and memorial notes may be posted online on the Sam Houston Memorial Funeral Home Huntsville website.