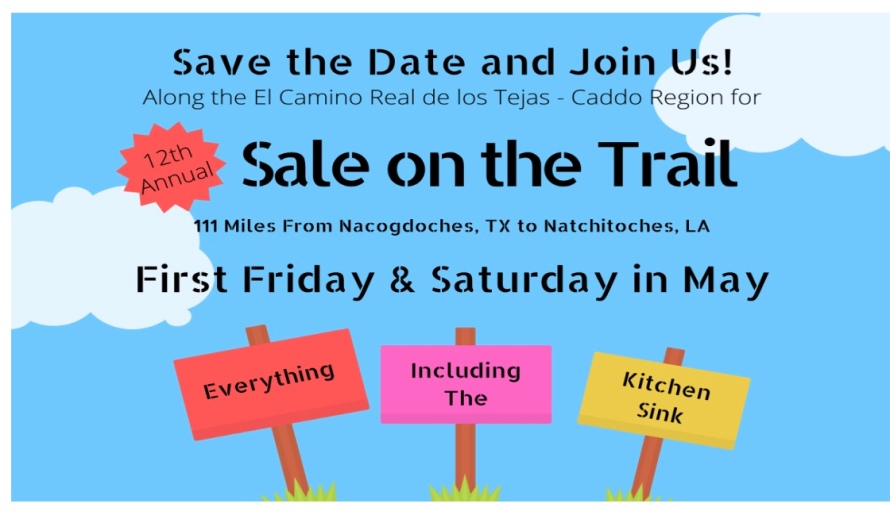 Shopping until you are dropping is just around the corner as the annual  El Camino  Real  Sale on the Trail takes place  Friday and Saturday, May 1-2.

Now is the time to make plans to drive the trail for lots of bargains. All folks have to do is hop into their cars and drive along Hwy 6 in Louisiana starting in Natchitoches and trek west to Many, La,  and across Toledo Bend Lake to Texas Hwy 21 into Milam and Hemphill , Tx.

Along the trail, shoppers will find new and used items sold by local businesses and private individuals.

If you are a shopping warrior, collector, or just looking for fun, a weekend shopping the trail is a wonderful way to take advantage of the beautiful scenery and historical markers along the El Camino Real de los Tejas.

Designated as a National Historic Trail in 2004, El Camino Real de los Tejas likely goes back more than a thousand years to a time when hundreds and hundreds of buffalo created trails as they moved south of the Great Plains each fall .

A number of these magnificent  creatures turned east at the Trinity River in Texas and followed their ancient migration route into Louisiana, through what later became Toledo Bend Country and on to the Red River.

Spanish explorers are said to have traveled this same trail in the early sixteenth century.

The El Camino Real was likely first opened in the early part of the eighteenth century, at the hands of a gallant French explorer, Louis Juchereau St. Denis.

In 1714, St. Denis established a French frontier outpost among the Natchitoches Indians, giving birth to the settlement of Natchitoches, just 30 miles east of present-day Many.

Shortly after coming to Natchitoches, St. Denis and his crew set out on horseback over the El Camino Real, which by this time had become a well-paved path. It believed the Indians directed St. Denis to the path.

St. Denis’ mission through his travels was to open trade relations between the French frontier at Natchitoches and the Spanish frontier on the Rio Grande.

This was a particularly ambitious aim considering the extreme hostility between the great empires of France and Spain.

St. Denis’ mission took him westward, traveling right through Sabine country and on into Tejas, which is the Spanish spelling of Texas, across the Rio Grande and into Mexico.

The Spaniards and the French who marked the trail were followed by such men as Moses Austin and his son Stephen Fuller Austin , who is known as The Father of Texas, Jim Bowie, Davy Crockett, Sam Houston and early missionaries of multiple faiths.