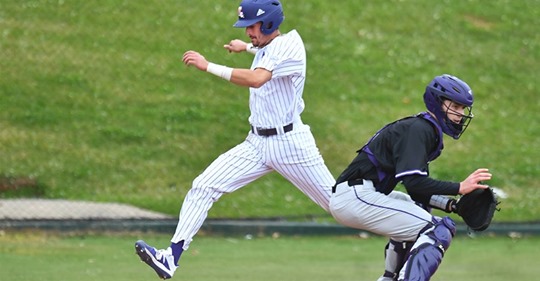 Once visiting Abilene Christian wrested it away, the Wildcats did not give it back.

ACU used a four-run sixth inning to spark a late-game outburst, pulling away for an 8-2 Southland Conference win against the homestanding Demons at Brown-Stroud Field.

“We just have to play better,” fourth-year head coach Bobby Barbier said. “That’s what the message was. We have to play better. Guys out of the bullpen coming have to command the strike zone with a couple of different pitches. We didn’t do that today.”

The Demons (10-4, 1-1) jumped to an early lead for the second straight game, tallying single runs in the first and second innings.

However, Abliene Christian starter Spencer Chirpich (1-1) limited the damage and kept it a 2-0 game through the fifth inning.

In the sixth, the Wildcats (7-6, 1-1) broke through, taking advantage of a Demon error and some good fortune.

Three batters after an error on a potential double-play ball, pinch hitter Miller Ladusau tied the game with a bases-loaded, two-run double off Josh Banes (0-1).

With runners on second and third, Seth Watts followed with a tie-breaking single that blooped over the mound for an infield hit.

Abilene Christian added an RBI groundout by Hayden Clearman to take a 4-2 lead after the sixth, and the Demons could not rally.

Northwestern State had its best late-game chance in the seventh inning when Cam Sibley drew a leadoff walk and Lenni Kunert followed with a single through the left side.

However, Wildcats reliever Tanner Riley sandwiched a pair of fielder’s choices around a strikeout to escape further damage.

“I thought we swung the bats well early,” Barbier said. “We had a few opportunities to score some runs. We had a few loud outs, and late in the game, we had some poor at-bats with men on base. That’s how you score. You have good at-bats with men on base. You don’t need a ton of them, but you have good at-bats when they’re out there. We just have to regroup and play better (Sunday).”

Peyton Davis (3-for-4) and Kunert (2-for-5) combined for five of the Demons’ eight hits off three Wildcats pitchers.

Colton Eager (2-for-4, three-run home run) and Watts (2-for-5) had multi-hit games for Abilene Christian, which won for the first time in eight visits to Brown-Stroud Field since rejoining the Southland Conference in 2014.

The series concludes Sunday at 1 p.m. Right-hander Johnathan Harmon (2-0, 1.35) is set to pitch for the Demons against left-hander Nate Hawkins (1-1, 1.29) of Abilene Christian.