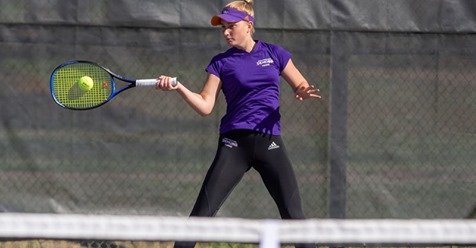 Freshman Olivia Alfredsson continued her strong play, as she won convincingly in her two singles matches Saturday, leading Northwestern State to a doubleheader sweep against LSU-Alexandria 6-1 and 7-0 at the Jack Fisher Tennis Complex.

It is the fourth consecutive home opening win for NSU (2-1), which remained perfect all-time against LSUA (8-0).

“We had two good matches which were very much needed at this time of year,” head coach Patric DuBois said. “LSUA has a good team and we had a lot of very good matches. They showed they are very well-coached and it showed from the start.”

A week after narrowly falling to the reigning Louisiana Player of the Year, Alfredsson dominated in her matches, allowing just one total game to be won against her in two convincing victories. She defeated Katheryne Campos 6-0, 6-0 and Marie Cool 6-0, 6-1, at the No. 4 spot in the rotation.

At the No. 1 spot in the rotation, freshman Mariella Minetti won all four sets en route to a sweep. Against Darija Mladenovic in the first match, she won 6-1, 7-5, coming from behind to win the second set to earn the sweep. In the second match, she controlled from the start, defeating Miljana Milojevic 6-1, 6-3.

Ela Iwaniuk continued her strong play from last year, earning two wins, not allowing her opponent to win more than three games in any set. At the No. 2 spot, she earned a 6-3, 6-2 win in the first match and she defeated Mladenovic 6-3, 6-1.

“I was trying to keep the baseline and not letting them push me back, staying aggressive,” Iwaniuk said. “Overall, I think the girls tried to work on their little details they needed to work on, so that is why we succeeded.

Judit Castillo Gargallo won convincingly at the No. 5 spot in each contest, dominating Cool at 6-0, 6-1 in the first match and Carolina Guerrero 6-4, 6-2 in the second match. Her two singles victories moved her to a tie for 20th with Kim Tollett for singles wins with 44.

Patrycja Polanska controlled the match in the first contest, winning 6-3, 6-1, and won a tight first set in the second match against Patricia Martinez before Martinez retired.

After falling in the first match, freshman Gig Kanaphuet fell behind 5-2 in the first set before rattling off 11 consecutive points to win 7-5, 6-0, to earn her first victory with the Lady Demons.

In doubles, NSU was victorious in all six matches, earning both doubles points. In four of the six, the Lady Demons won in decisive fashion, not allowing more than two games to be won by the Generals. The second match was when NSU really flexed its muscle in doubles.

At No. 1 doubles, Iwaniuk and Emilija Dancetovic and at No. 3, Alfredsson and Castillo Gargallo each won 6-0. At No. 2, Polanska and Minetti won a tight match in the second contest following a 6-2 win in the opening match.

“We did a lot of good things today, but we certainly have plenty to improve upon. We have a very tough match at North Texas next Saturday, so hopefully this will be a springboard into our preparation this week for that match.”

NSU hits the road for the test at UNT next Saturday, which begins a three-match road trip for the Lady Demons. The next home contest will be Feb. 14 when NSU battles Alcorn.