Demons finish strong to pull away from Lamar | Around The Town 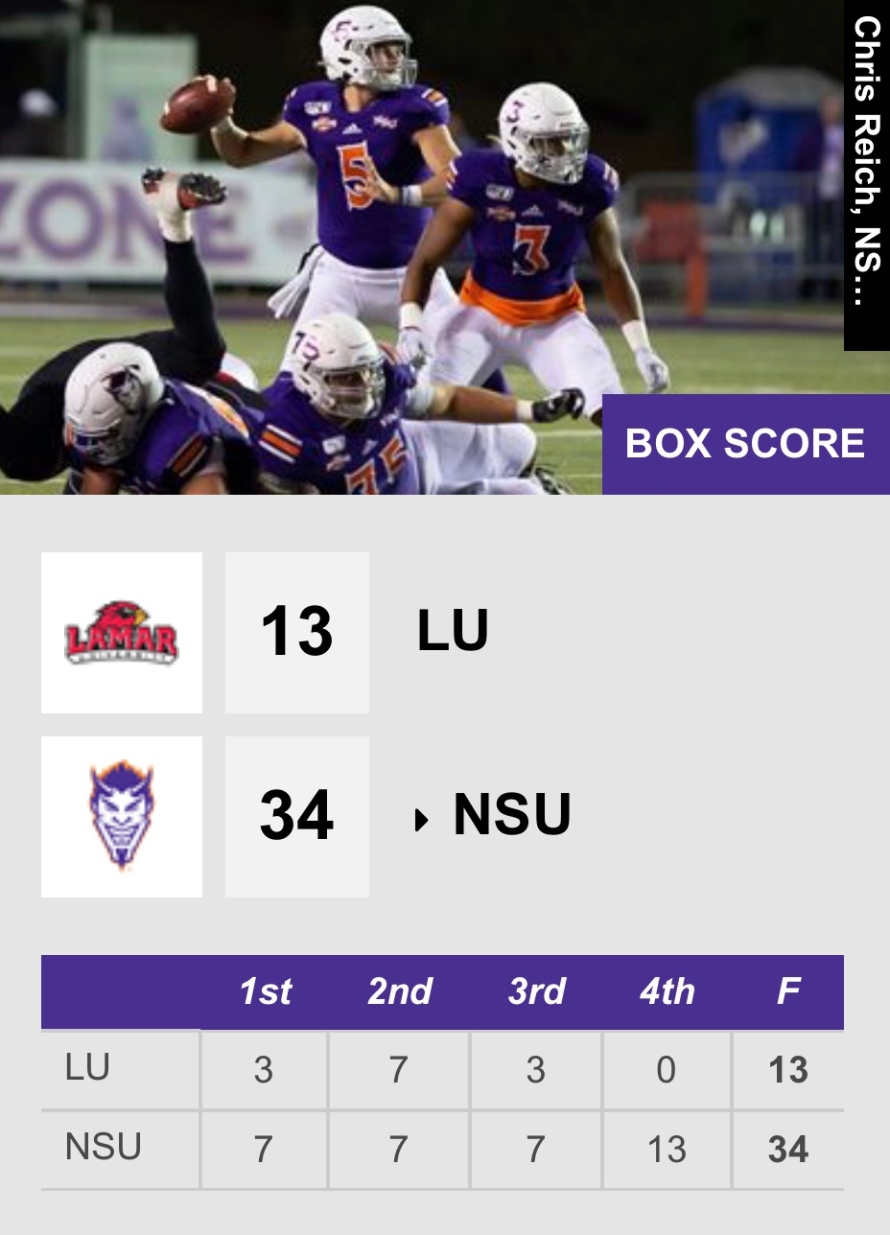 An empty red-zone trip late in the third quarter threatened the Northwestern State football team with a feeling of déjà vu Saturday night.

Valsin’s fumble recovery and ensuing return to the 1-yard line set up one of quarterback Shelton Eppler’s four touchdown passes as the Demons finished with a flourish in a 34-13 Southland Conference victory against Lamar at Turpin Stadium.

“It felt good to get the team started and hyped up,” said Valsin, who finished with six tackles, 1.5 for loss and the 24-yard return of a Marcellus Johnson fumble late in the third quarter. “That’s what we needed to keep our momentum going. I’m just happy I made the play.”

It appeared the Demons (2-8, 2-5) converted immediately with a 1-yard Stadford Andersontouchdown run, but a replay review ruled Anderson down at the 1. Two plays later, Eppler found Tanner Ash for a 2-yard touchdown that pushed NSU’s lead to 21-13.

Valsin’s fumble recovery came on the third play after the Demons missed a 19-yard field goal, leaving them clinging to a one-point lead despite statistically controlling the first 43-plus minutes of the game.

The Demons limited Lamar to 200 yards total offense, threatening to hold an opponent under that number for the first time since limiting Langston to 122 yards in 2013. A late 36-yard pass from Johnson to Carmoni Green lifted Lamar’s passing total across the 100-yard mark.

“Lamar got the field goal early, but we did a great job against the run,” second-year head coach Brad Laird said. “With a running quarterback, we did a great job of containing him and getting them behind the sticks. They maybe had 12 rushing yards in the second half. They had one big play, but then we held them on the goal line for a field goal.”

Given new life after Valsin’s near scoop and score, the Demons built on the momentum with a running game that produced a season-best 177 yards.

After replay took away Anderson’s 1-yard touchdown, he left no doubt on the longest run by a Demon this season, breaking into the second level and outracing the Cardinals secondary.

“It felt amazing to get one back,” Anderson said. “It was on me on the first one to not get in, even though I thought I got it in. The second time, I got to the second level, and I had it on my mind that I wasn’t going to be stopped.”

Buoyed by a defense that mostly stifled Lamar, the Demons’ offense had time to find its finishing gear in the fourth quarter.

Eppler started NSU’s game-closing 20-0 run with his 2-yard scoring pass to Ash and extended it by finding Kendrick Price for a 12-yard score with 12:00 remaining.

It was the second time the pair hooked up on a scoring play Saturday, following a 4-yarder in the second quarter that pushed NSU’s lead to 14-3.

The second Eppler-to-Price connection was a record breaker as it gave Eppler his 50th career touchdown pass, most in NSU school history. That was the third mark the senior quarterback from Navasota, Texas, broke Saturday night.

Eppler established a new single-season passing yardage record with 2,978 and became the school’s all-time leader in passing attempts at 781. He also moved into second place on NSU’s career passing yardage list with 5,587, leaving him 451 yards shy of breaking Laird’s all-time mark of 6,037 yards.

Eppler’s totals have come in 19 games of action after transferring from Trinity Valley Community College.

“It was awesome to come out with the win,” he said. “Defense played light out, and the offensive line gave me time to get the ball out to our receivers and running backs. I felt like it was a flawless fourth quarter.

“I feel it’s gone by in the blink of an eye, and I was just getting here. The coaching staff and coach Laird welcoming me and giving me an opportunity. Cheers to every moment, and I can’t wait for these next two weeks to continue to work with my brothers.”