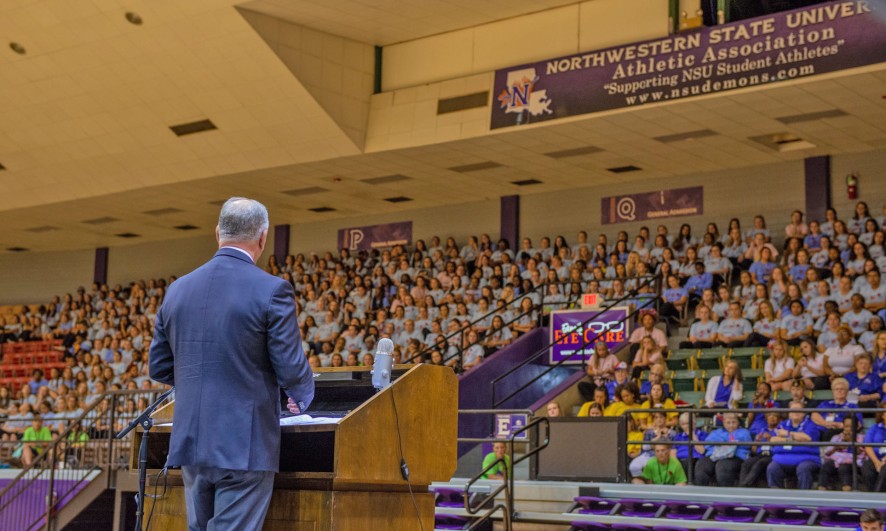 Governor John Bel Edwards addressed more than 1,000 rising high school seniors during the joint convocation of Louisiana Boys State and Louisiana Girls State at Northwestern State University Friday, urging them to engage in public service and volunteerism in their communities.

“I have never been more excited about being governor and the future of our great state,” Edward said.  “I’m looking at the future right now. I trust that you’ve had a tremendous experience here in Natchitoches, learned more about government and the inner workings of democracy and developed a sense of selflessness and a desire to serve.”

Louisiana Boys State and Louisiana Girls State are programs for rising high school seniors in which they learn about government and how city, parish and state agencies work together to complete projects and solve problems. Participants, referred to as citizens, are elected to state and local offices in mock elections. The programs are organized by the American Legion and the American Legion Auxiliary for youth from all parts of the state.  Northwestern State University has hosted the program since 2007.

“I’m feeling optimistic and bullish about our future,” Edwards said, encouraging the young people to stay in Louisiana, contribute to society and serve in their communities through volunteerism, through civic organizations or by serving in the armed forces.

“I’m looking at a diverse group of young men and women.  You look like the state of Louisiana,” Edward said. “Never forget that your voice matters.  Speak up. Your choices matter. Let the emphasis this week on selflessness inspire you.”